So finally, after a couple crazy non-stop weeks of being busy, I've had some free afternoons to start on the Arwen Blood Red dress I've been promising to work on. My plan is to recreate the dress for the upcoming LOTR movie in December: The Hobbit: An Unexpected Journey. The idea being, to gather a large group of friends and fellow "LOTR-ers" and descend upon the theatre at the midnight premiere, costumed in the style of Middle Earth. Hence this project:

Lovely, isn't it? This was my favorite dress by far of Arwen's from the trilogy. Elegant style, striking colors and contrasts, and altogether feminine. I fell in love with the dress instantly, and it made its way quickly to the top of my "Make Someday" list. And with the perfect timing of the next three movies coming out, now was the time. 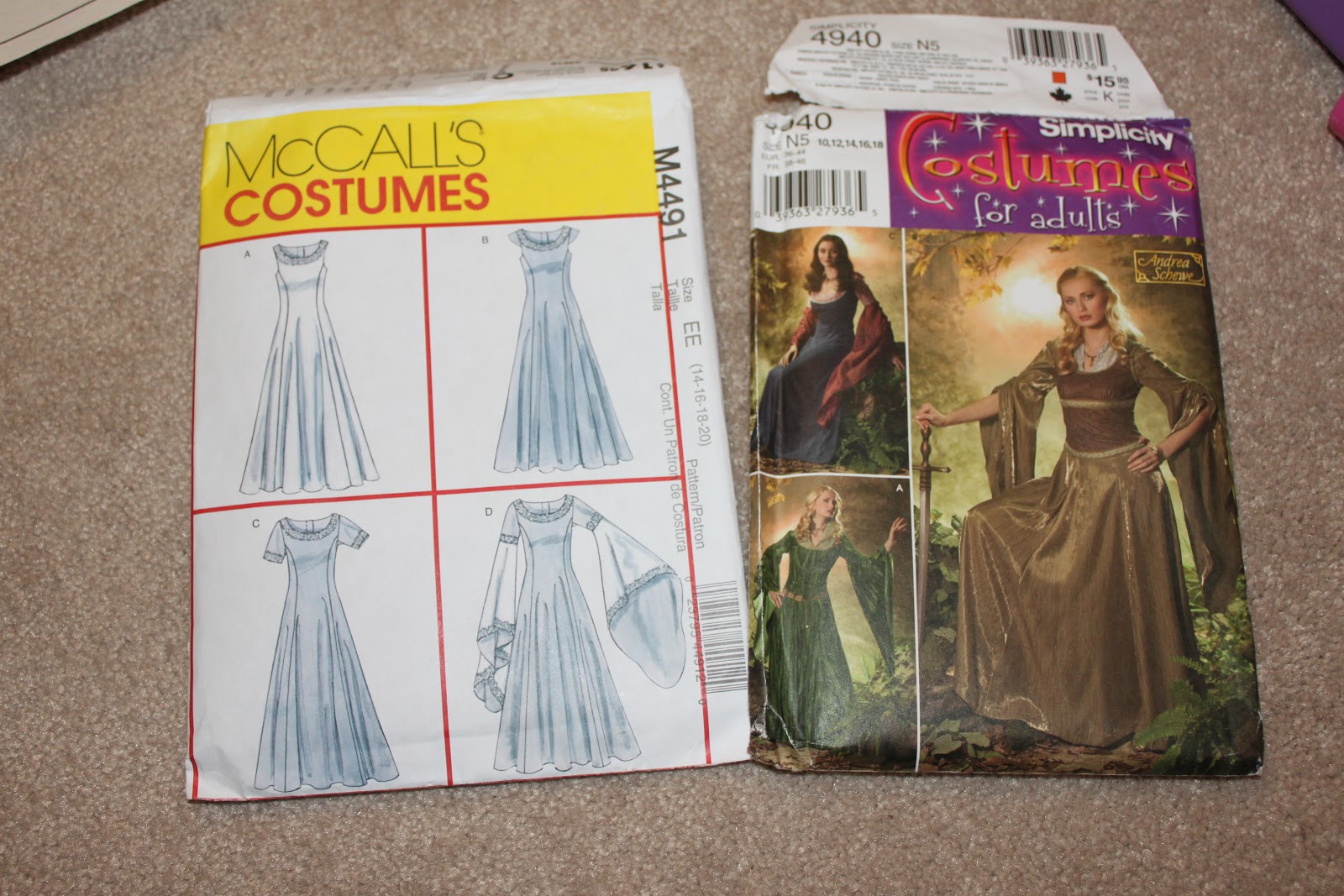 So there were two patterns I was torn between using for this dress. Simplicity #4940 has the entire dress made into one whole piece- jumper, sleeves, and all. But McCalls #4491 (Which, coincidentally, I originally picked up for the lower sleeve pattern) has this lovely jumper that could easily be made into the overdress, while using a modified version of the Simplicity pattern as the underdress, and crafting my own sleeves (Neither pattern had the mid-calf length sleeves that I wanted for my dress). So, I'll be using both patterns, and making both the underdress- full length minus the train- with the sleeves, and the jumper with the trim over all. If you aren't sure what I'm talking about, see the below picture. 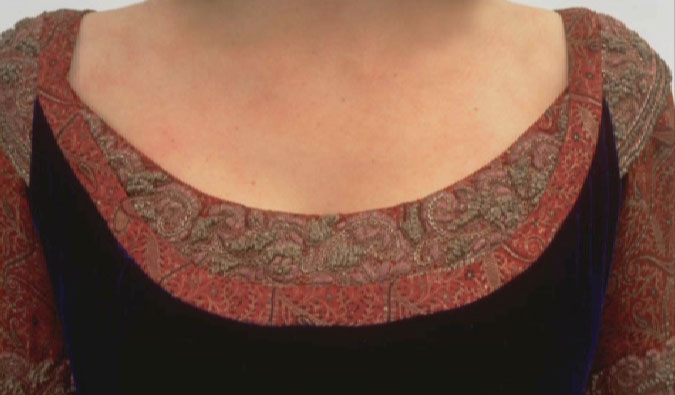 You can kind of see here (hopefully!) that there's a sort of overdress (the blue dress with the vivid red trim) over all, with an underdress that has the sleeves, and a wide trim beaded border underneath. If you decided you didn't want to go through the hassle of making both items, Simplicity #4940 is the pattern for you. However if you, like me, are a glutton for punishment, and you like the way the two layers look, then you've come to the right place. Hopefully my experience through making this will help give you a better idea on how to go about that (or at the very least, what to avoid!)

Fabric:
This was the hardest part for me. I'm so picky when it comes to fabrics. I wanted it to be EXACTLY like the movie. Unfortunately, limited by money, availability, and time, I wasn't able to go exact. But I am quite happy with what I did end up with! 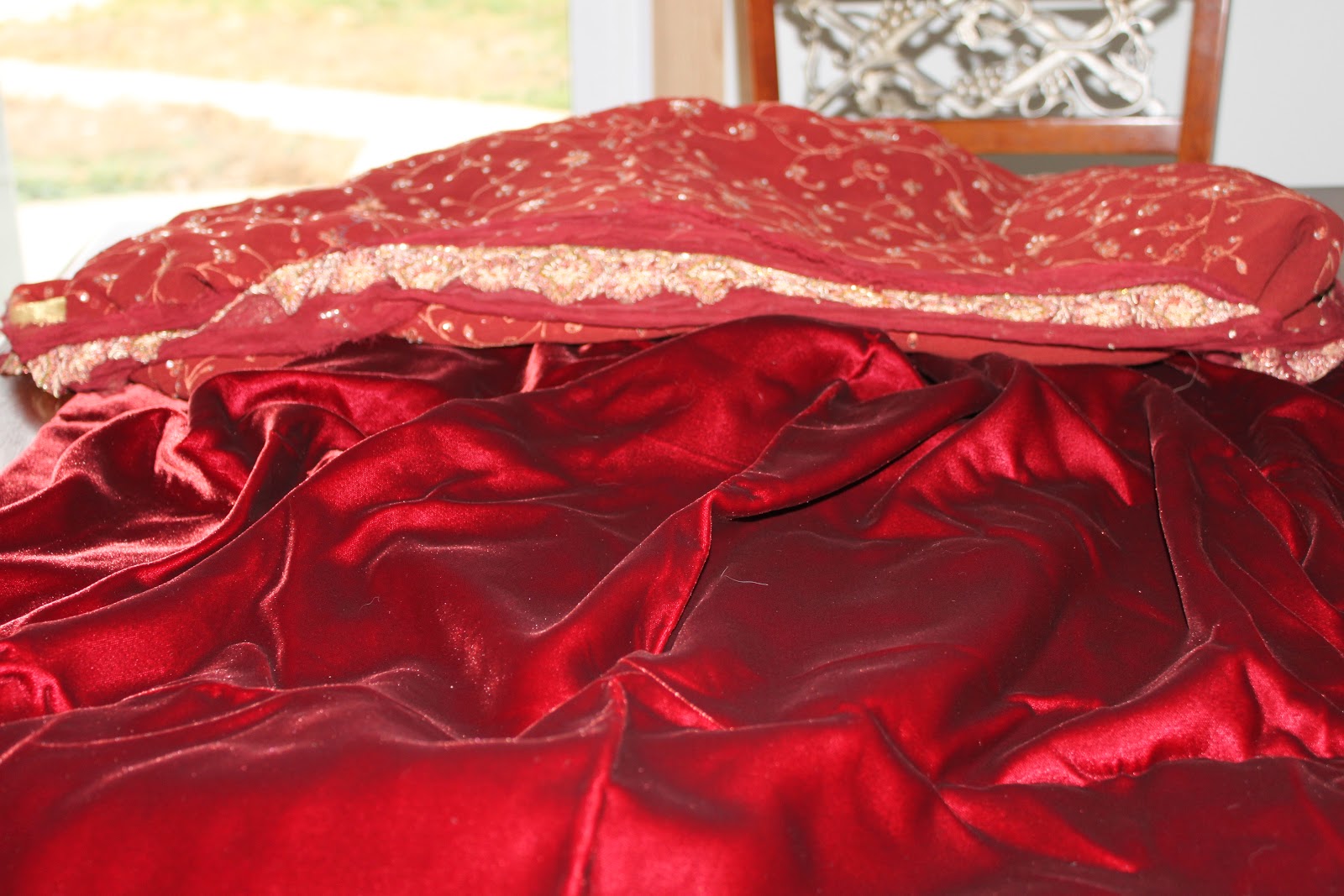 This red velvet I found at Denver Fabrics while shopping for my cloak material. I've had it sitting around in my closet for a few months now, waiting for the right fabrics for the rest of it. I think, honestly, this fabric is what finally inspired me to start on this dress. It was absolutely perfect. It's hard to tell in this photo, but from one angle, it's a deep shade of crimson, but from the other angle, it hints of black undertones. It's a lot darker than the official dress, but I loved the colors. 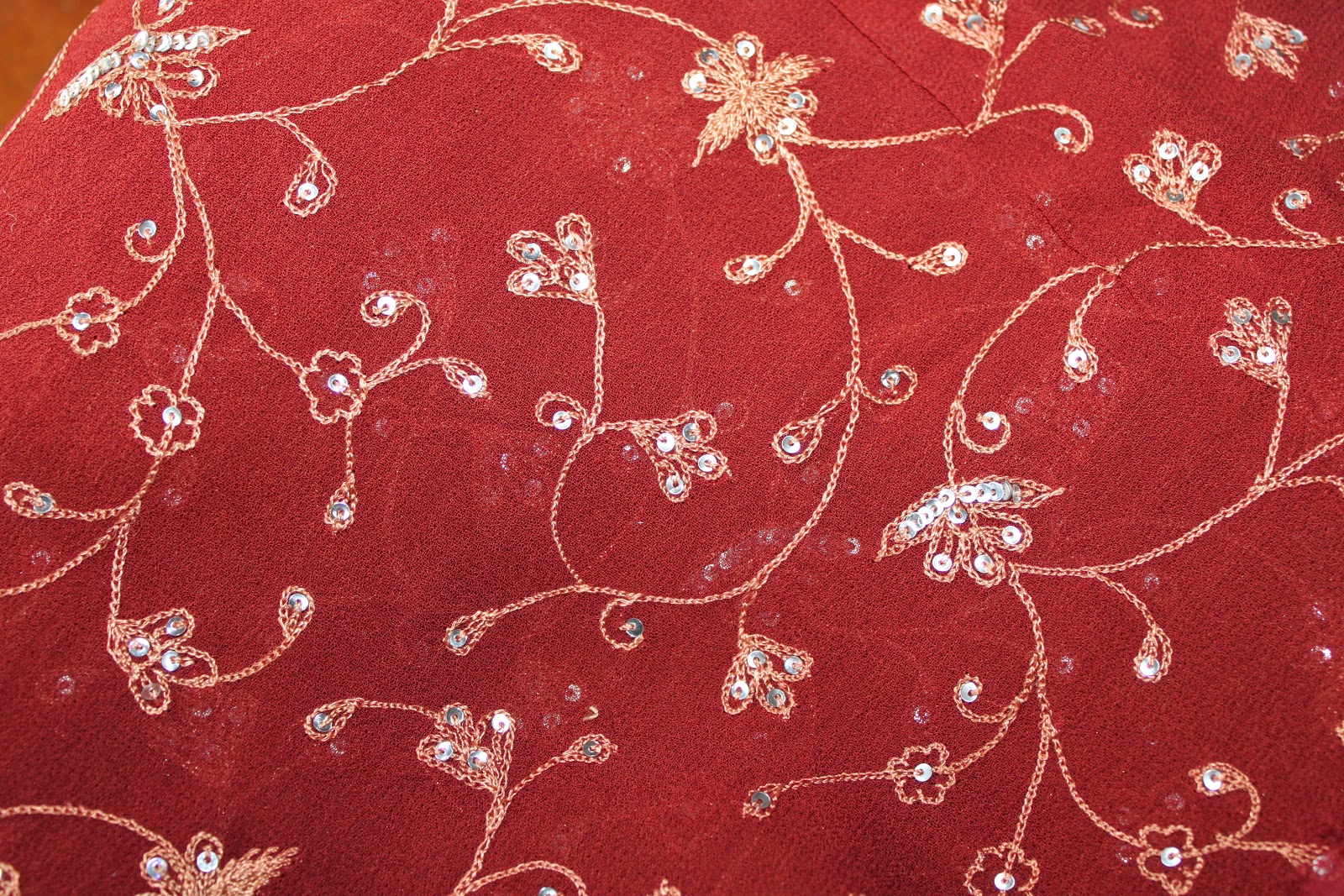 If you noticed in the official photos above, you'll notice that the upper sleeves (and the trim for the overdress) are made from a different material than the lower sleeves. After hunting around unsuccessfully for a red/gold paisley print to use, my wonderful sewing friend Chris (who, incidentally, is also making this dress for her daughter), suggested that I check on ebay for used sarees. Less than an hour later, I'd found both my contrast fabric AND my trim. Speaking of: 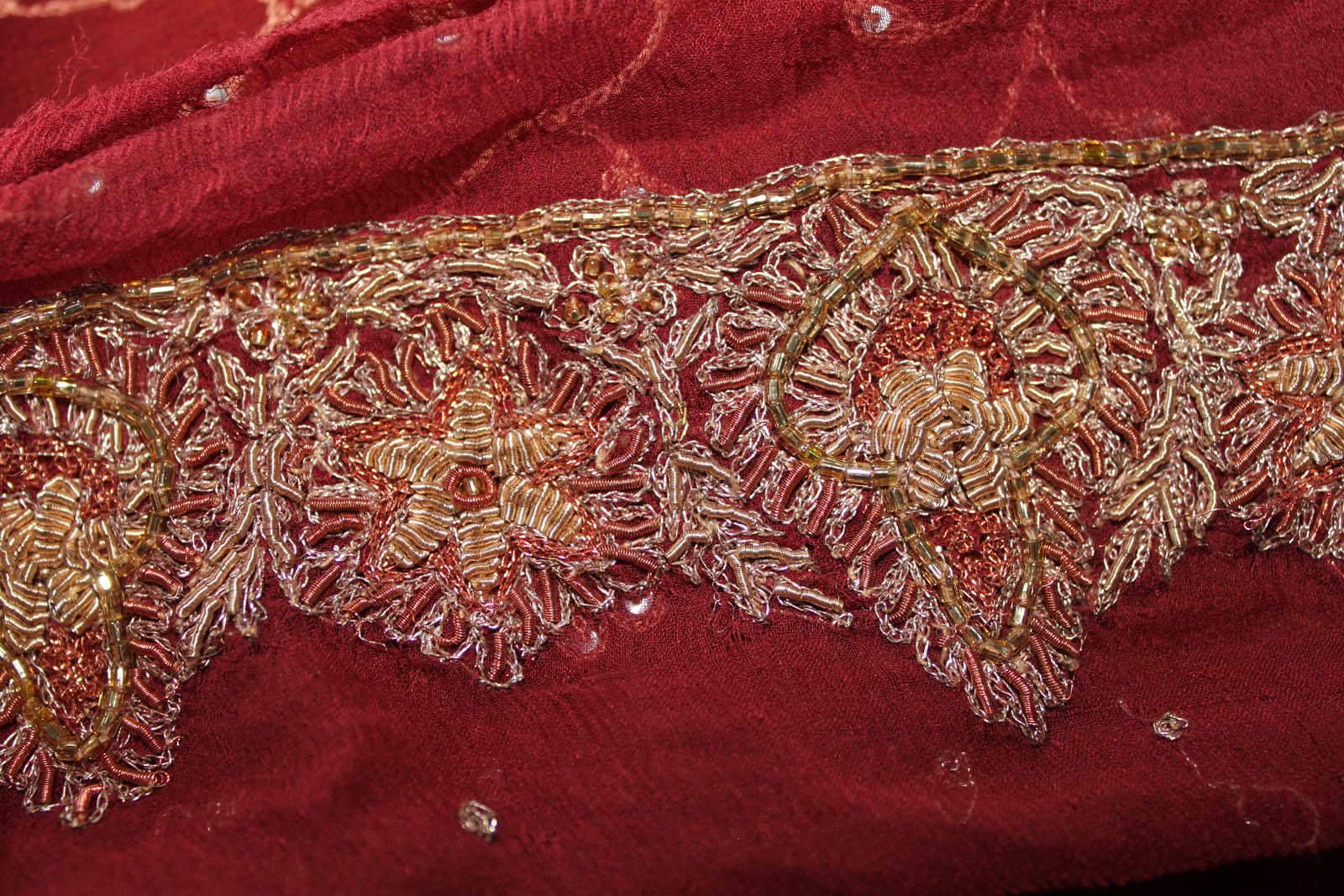 The trim especially, I was quite proud of. It's very intricate, with beads that resemble miniature spring coils.

The only thing left to find was my main dress velvet! I was at a loss until I visited one of the larger JoAnn's in the area. They had 10 yards of this beautiful velvet. It wasn't quite as dark as I had originally planned for, but since I was going for a darker color on the lower sleeve, this color set it off quite well. With the flash, it looks much lighter than it is. 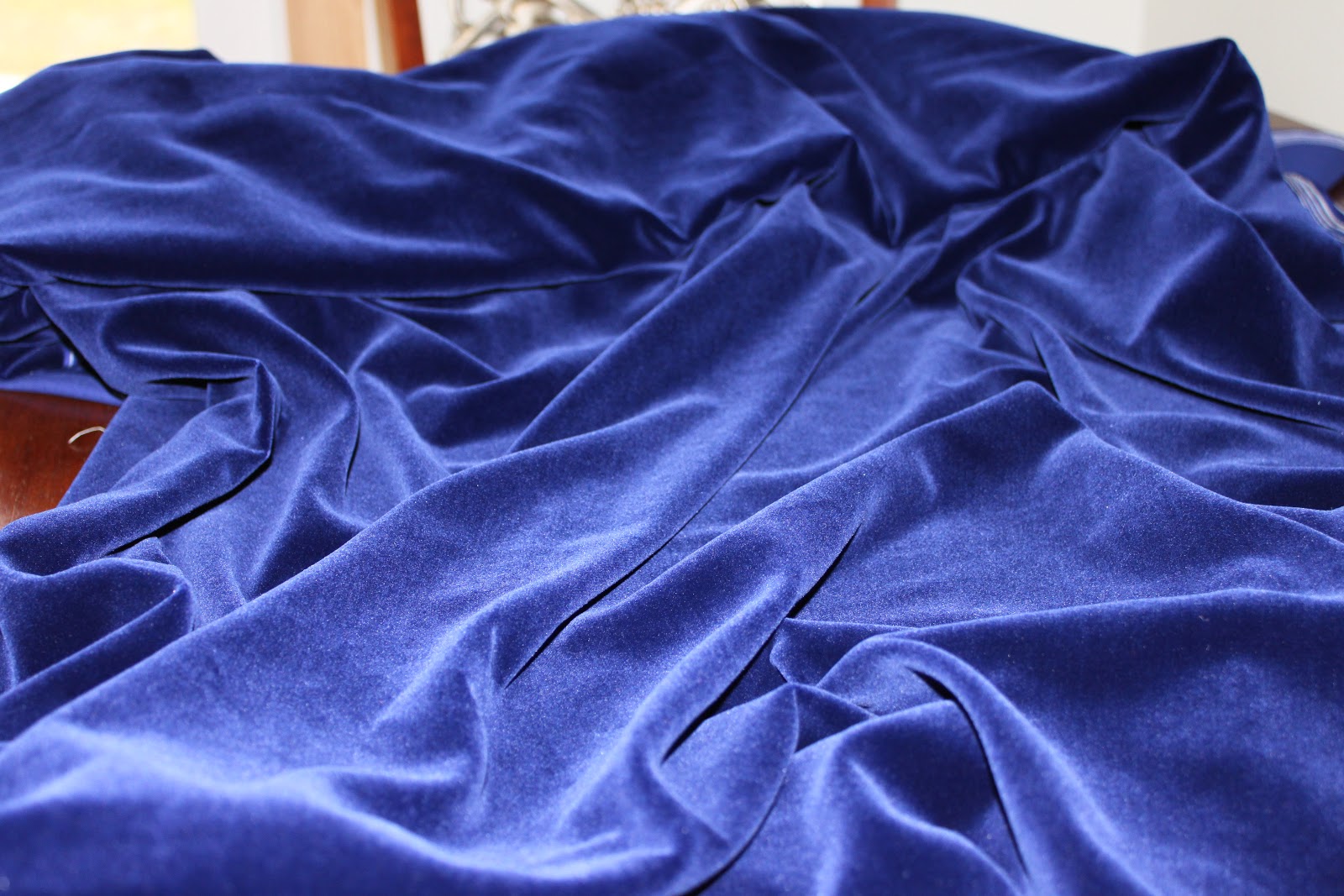 I also picked up several yards of a lovely dark blue china silk that was on sale for the lining on the overdress.

So, with all my materials in hand, all I needed was time to start my project!

So for the overdress, I pretty well followed the pattern exactly (Using McCalls 4491, view A), all the way up to putting the lining in the dress. Here's where I deviated a little. 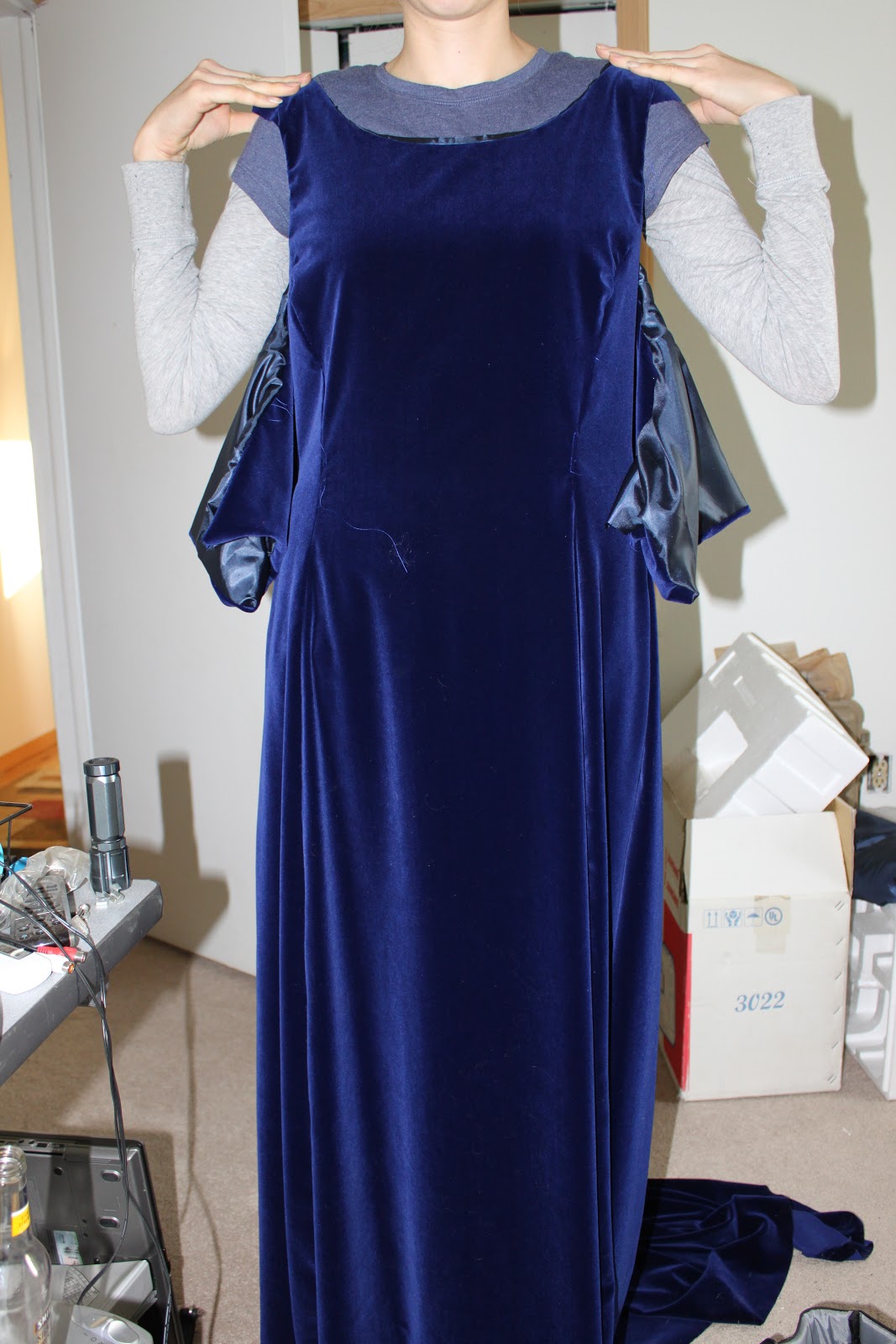 The jumper pattern came out with a really high neckline, whereas the BR dress has a low neckline on the jumper, to better show the trim on the dress underneath. Also, the straps were a little too wide to add on a bias strip of my contrasting fabric later on. So, here's what I did. 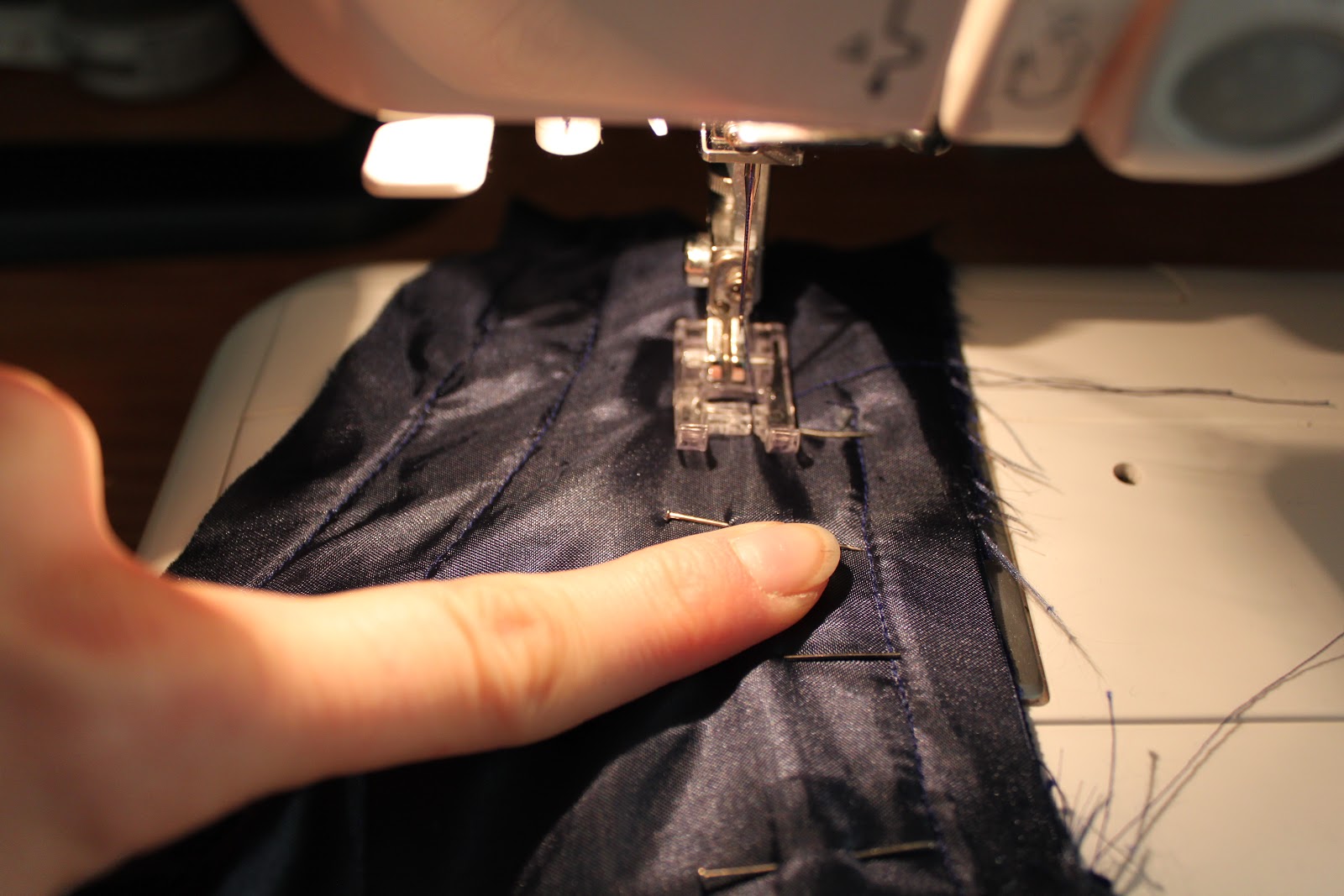 What I'm pointing to in the picture is the original seam. Standard distance, 5/8" in from the edge of the fabric. Now, what I'm about to tell you, I do not recommend doing. I took a risk, and gambled on my fabric, because I was being lazy. Lucky for me, it came out the way I wanted, but I would definitely do a mock-up next time instead and cut the fabric right the first time. I slid the fabric in under the foot and sewed another 5/8" in further, shrinking the straps quite a bit, and lowering the neckline. I did this all the way around the upper neckline, through the shoulders (the BR dress seems to have large loops for the arms- probably for moving all that fabric that's underneath around!), and on the upper back. I did not sew again over the back edge, since I was planning something different there. 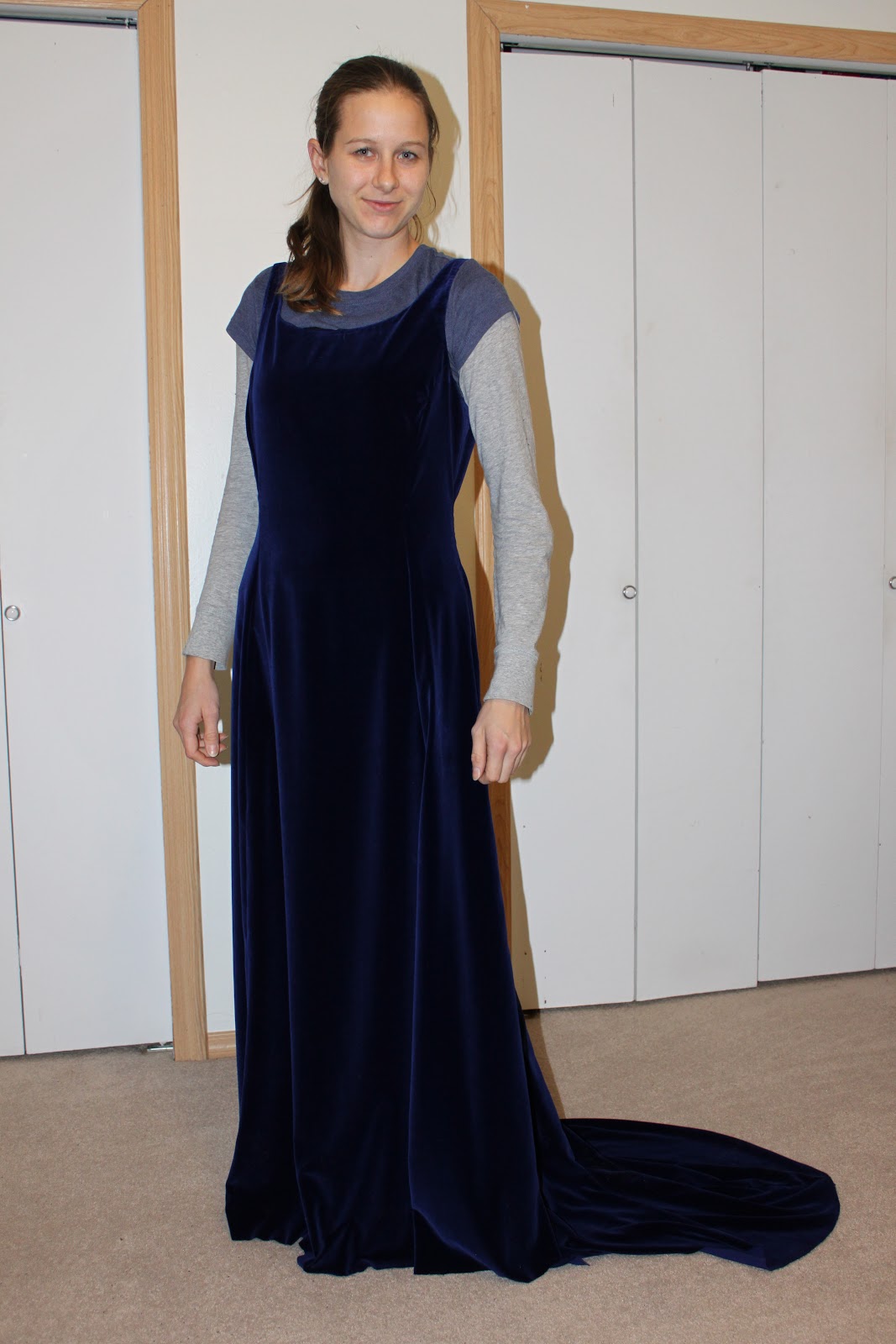 Lucky me, it came out exactly how I wanted! It's still a bit higher on the neckline, but the straps are much more slim, and adding on the contrast fabric will make quite a difference.

Once I had determined that my gamble had paid off, I finished the straps according to the pattern, but instead of adding in a lace up back, I put in an invisible zipper. According to rumors, the original dress just slipped over the top of the underdress, with no way to open it up. Invisible zipper for me insured that it would look official, with the ability to get in and out of the dress more easily. I also added in a short invisible zipper in one of the side seams for the possibility of a pocket added in later (I haven't completely decided if I'm going to go that direction or not, but it would be nice to have a place to put money/tickets/credit cards and I.D. in, eyy?).

So all that's left for the overdress is a hem, and then adding on a long bias strip of the contrasting fabric. I'm feeling a lot more confident about the rest of the dress, seeing as how easily this part of it came along!

Will post more as I finish this part of the dress up. Meanwhile, here's a look at the elvish cape I'll be adding on top of the finished outfit! 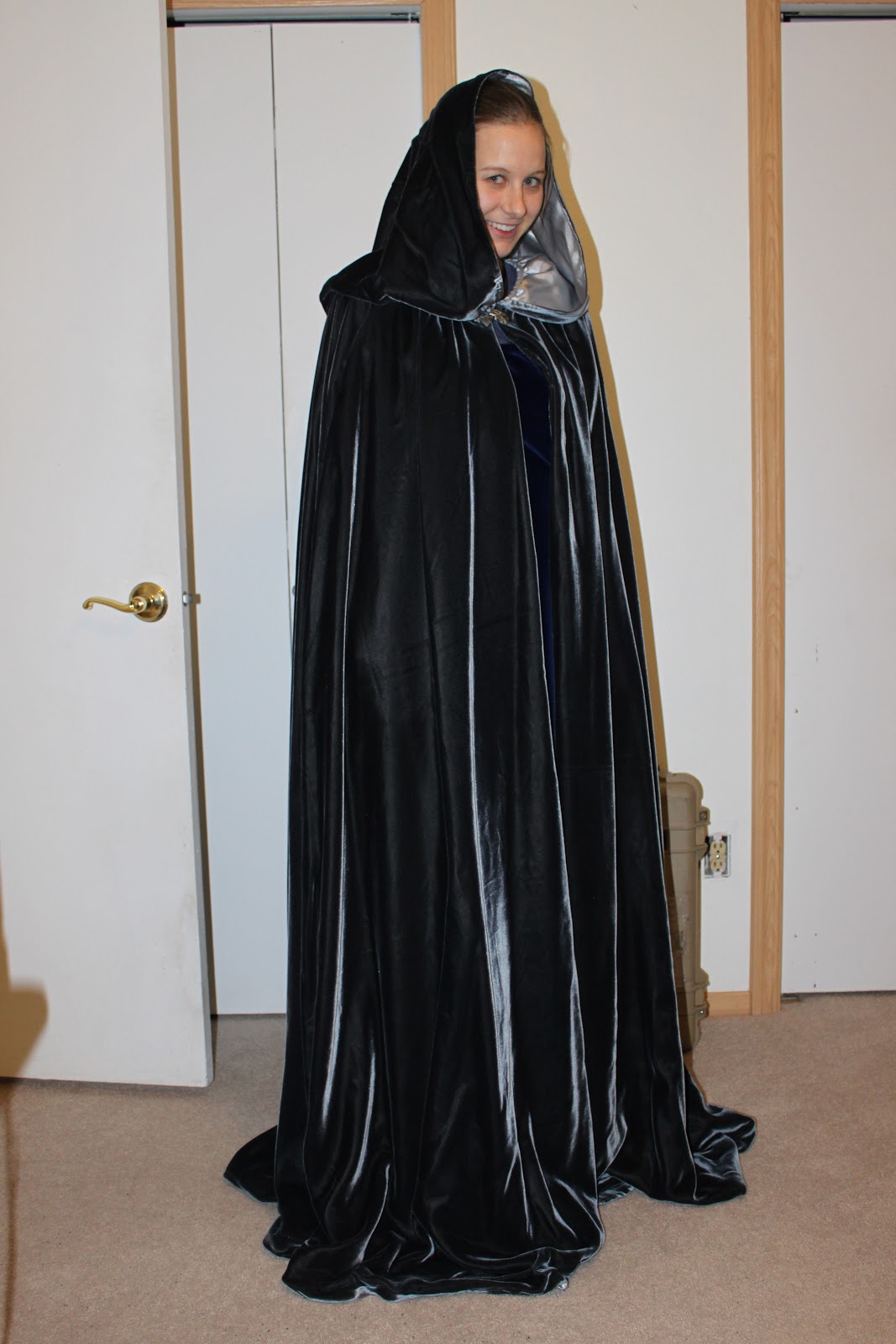