So, the underdress. This process took quite a bit longer than the overdress, understandably because of all the extra add-ons and the hand sewing that I did on parts of it, including ripping and resewing seams that just weren't working for me. It was a fun experience, though, and I learned quite a bit from it. So here's what I did. 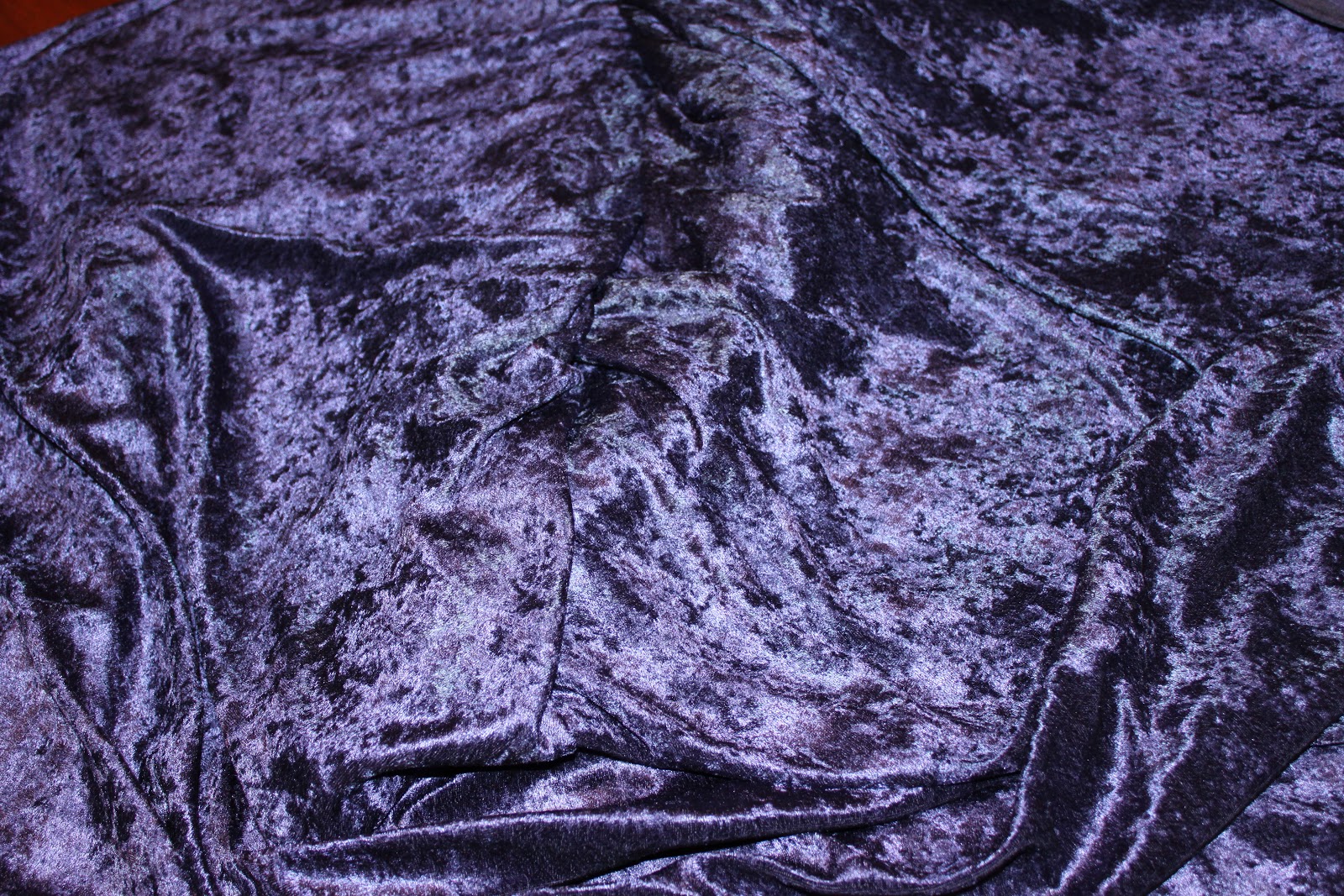 I was missing one important part for the undergarment- the bodice fabric! I had originally thought I was going to use the navy china silk I ended up using to line the top dress- however after thinking through the process, I came to the realization that lightweight of a fabric would not hold up the heavy lined velvet sleeves I was going to add on later. So I found this lovely crushed velvet panne at JoAnns- on sale, even! It had a side to side stretch, which was my only concern, but since the velvet backed neckline and upper sleeves would be the main support for the dress, I didn't worry too much. My only other concern was that panne is a pain in the neck to sew, pin, or anything. It crawls like none other. Lucky for me, sewing a little more slowly and taking extra time on it paid off, and I didn't have to deal with too much grief while making this part of it. 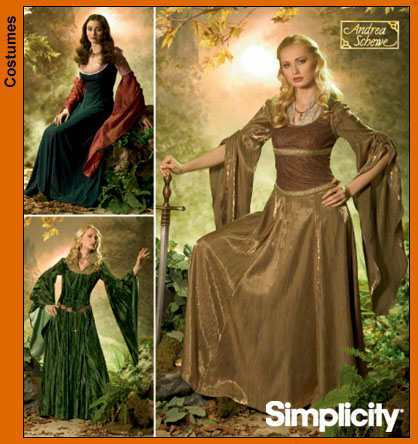 So, after cutting and sewing the bodice according to the pattern, I toyed around with ideas for the sleeves.

Looking at this picture of the pattern (It's not very high res), you can sort of see that the sleeves aren't nearly as full as the original dress (refer to the photo in chapter 1 of my progress!). I wanted the full, deep sleeves that would fall to darn near ankle length if I had my hands at my sides. So, I checked around and scouted for other BR dress tutorials to see what others did. The best suggestion that I ended up using came from www.alleycatscratch.com (which is an AMAZING costuming reference site- these people know pretty much everything about sewing!), where they basically used two quarter circles sewn together top and bottom for the sleeve (It's rumored, apparently, that the sleeve could possibly be a full circle, but I didn't do this because 1)with as thick as my velvet was, my sleeves wouldn't hang right, and 2) I only had just enough fabric to do the two sleeves and the neckline and upper sleeves). So, I got my muslin out, made a makeshift drafting compass, and created my own mock-up pattern.

After I cut the sleeves, neckline, and upper sleeves out of the velvet, I set my sleeves aside for later, since I didn't have my lining material yet. I cut interfacing, fused it to the velvet, and then I got out my used sari.

I tried to be super careful in cutting the sari fabric, since it's absolutely stunning, and there's so much of it. I'm sure at some point I can cut that beautiful gold border off and use it in another project... and there's even enough of the patterned area left over that it might come in handy for something small as well. Sari overlay then got basted to the neckline, and three layers of velvet (gulp!) and a layer of panne got sewn together. Honestly, I debated going back and using a different fabric for at least the outer part of the neckline. When I first tried the dress on after I got the neck edging sewn on, it honestly felt like I was wearing shoulder pads because of the thick fabric. I may still go back and change it someday, but for now, I've come to terms with it. After I hand-stitched the neck outside and in to the panne, it didn't look half bad, either.

I ended up spending quite a bit of time, actually, tearing out and redoing the zipper edges of the neckline. I think with three layers of velvet, fabric started sliding. All I know for sure is, when I went to put the zipper in, the edges didn't match up. I think I spent the better part of a day tearing out the zipper and reinstalling before I thought of pulling the neckline edges out and sewing them in again (believe me- if you can avoid ripping stitches out of panne, I'd recommend it. It's a nightmare, especially if you've done a good job at color-matching your thread. Also, panne rips VERY easily.). Finally, I got it right, and finished hand-sewing the entire neckline down. Whew.

I went ahead and attached the upper sleeves to the dress, since I didn't have the lining for the lower sleeves yet.

For the sleeves, I'd been eyeing this really lovely garnet colored Dupioni silk that had the same blackish undertones as the blood-red velvet for the outer sleeves. So, I made another trip to JoAnn's (I think I must be their favorite customer this month), coupon in hand, and got four yards of my lovely lining for a steal.

Four cut-outs of my mock up later, I had my sleeve lining. I did a basic bag lining with the velvet, and attached the whole thing to the upper sleeves. 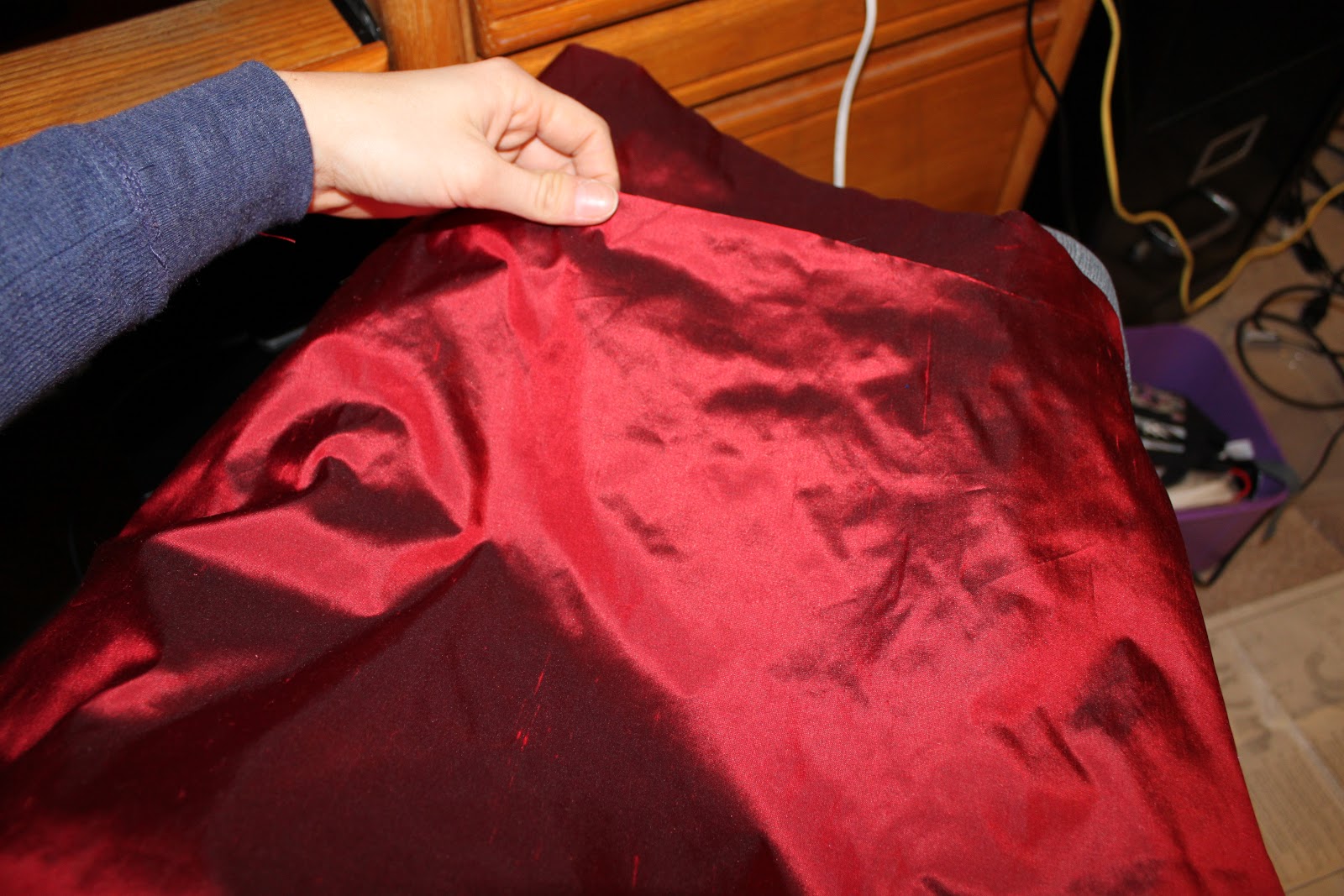 Just can't get over this fabric! Too bad it almost never gets seen! :(

After attaching the sleeves, I hand sewed the trim to some leftover silk as a backing, which, unfortunately, I didn't take any pictures of :( I spent the better part of a day hand-sewing the trim to the backing, and then several hours more hand-sewing the trim to the sleeves of the dress, at the seam where the upper and lower sleeves met. I had toyed with the idea of sewing the beaded trim at the neckline of the dress as well, since the original dress had the same trim around the neck as the upper sleeves, but I wasn't entirely sure how I was going to do that at the time. Perhaps, later on, when I change out the velvet for a lighter fabric, I'll put the trim in, instead of the sari overlay.


So really, all that was left to do as far as major things go, was to hem the under and overdress, and to put the overlay binding around the neckline of the overdress. 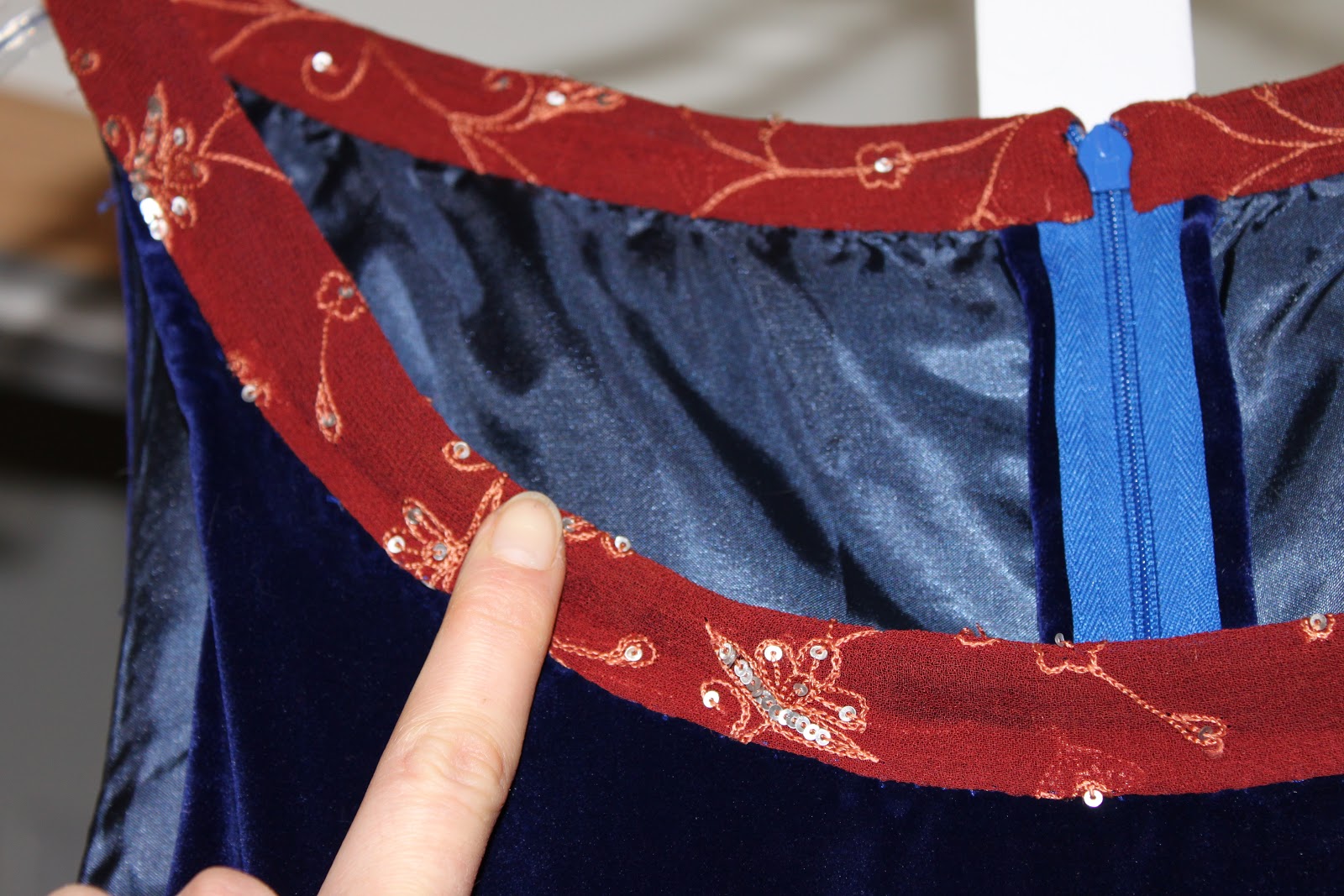 For the trim on the overdress, I made about an inch border around the entire thing. Looking at the official photos, I'm guessing that the velvet on the underdress tapers off completely just before the shoulders, and the trim is the only fabric holding the dress up. However, that's only my opinion, and not even a professional one at that. However, I knew my sheer net wasn't going to hold up that much heavy velvet, so I pulled the trim as close to the edge as I could as I got closer to the top of the shoulders.

Once I finished the trim on the overdress, I had one last major thing planned. I put some snaps on the underside of the train on the overdress, and put the other half on the inside of the dress, as sort of a lazy-man's bustle. It's not super fancy, but if I don't want to drag my dress in the dirt, I can just snap it up real fast, and not have to worry about it.

So, that's really about it, as far as the dress goes! I still haven't 100% decided about the pocket on the overdress (I'll have to change out the zipper if I do- cream doesn't exactly hide well in the deep blue of the velvet!), but I'm quite happy with the results!

So... do you want to see the final product??

So, there it is! The final outcome of several months of planning, and about four weeks of work! I'm extremely satisfied with how everything came out, with only minimal changes to the original patterns. Now all that's left to find is a good pair of shoes to wear with the outfit!

So, in closing, it's probably a good thing that I don't do sewing projects of this caliber often, because I'll tell you what- once I got started on the overdress piece of this outfit, I literally couldn't stop thinking about finishing this dress until I finally put the last stitch in. It's kind of good in that way, because you're always on track with what you're doing, as opposed to tossing the project in the closet for a couple months, then pulling it out later on and wondering where on earth you left off. It's been a very rewarding experience for me, and I've enjoyed every minute of it.

Thank you so much for following me on my mini-adventure! It's one of hopefully many more to come! If you really enjoyed this, please feel free to subscribe, or leave me a comment!
Posted by adrienneamb at 11:30 PM